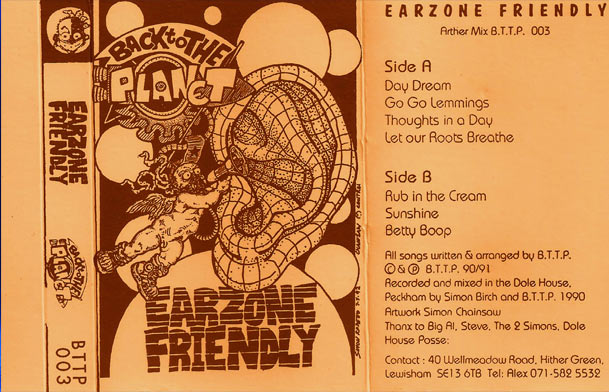 We finally got round to recording our old tapes and sticking them up on Soundcloud the other day. Earzone friendly was the first of our tape LPs, it was recorded on a 4 track Fostex cassette player at the dole house with a bunch of borrowed mics and bits and bobs belonging to our great engineer Simon Birch.

Simon later worked with us on the Warning The Public cassette LP and helped remix a few tracks after that. He was our live engineer too for quite a few gigs and an infamous disaster tour of Spain. Guy’s keyboard was a Casio home organ, and we had been together for about 6 months by this time.

The Dole house was a squatted Unemployment Benefit Office in Peckham South London, and we played there many  times over the 18 months it was in existence. we became the house band due to the fact that all out gear was stored there and we used to lend it out to other visting bands on gig nights. The whole EP was recorded in the main hall, which had a great sound to it, in one afternoon, then Fil overdubbed some vocals and that was it!! Basic but great.

This website uses cookies to improve your experience while you navigate through the website. Out of these, the cookies that are categorized as necessary are stored on your browser as they are essential for the working of basic functionalities of the website. We also use third-party cookies that help us analyze and understand how you use this website. These cookies will be stored in your browser only with your consent. You also have the option to opt-out of these cookies. But opting out of some of these cookies may affect your browsing experience.
Necessary Always Enabled
Necessary cookies are absolutely essential for the website to function properly. This category only includes cookies that ensures basic functionalities and security features of the website. These cookies do not store any personal information.
Non-necessary
Any cookies that may not be particularly necessary for the website to function and is used specifically to collect user personal data via analytics, ads, other embedded contents are termed as non-necessary cookies. It is mandatory to procure user consent prior to running these cookies on your website.
SAVE & ACCEPT