Warning: Use of undefined constant php - assumed 'php' (this will throw an Error in a future version of PHP) in /home/customer/www/backtotheplanet.com/public_html/wp-content/themes/bttp-theme/header.php on line 59 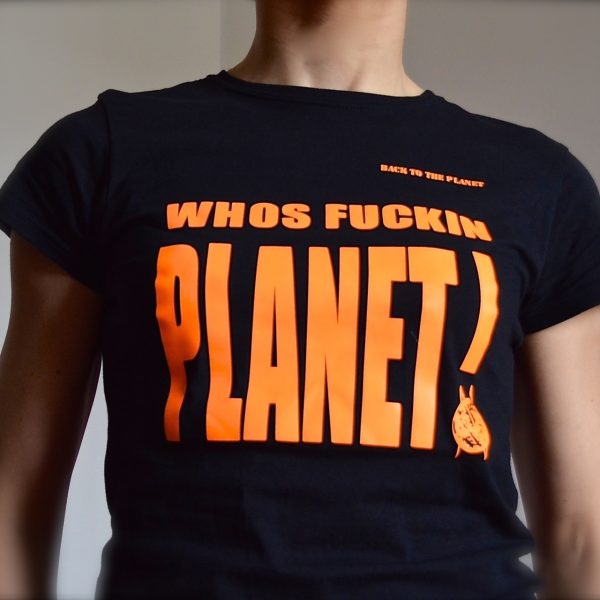 Impress all your friends with an official, grammatically incorrect, “WHOS FUCKIN PLANET!” T-Shirt.

The 1990’s were the height of bad grammar and hair.  Festivals were full to bursting point with people with dreadlocks and an acute disregard for correct english. Now you can relive those heady days with us, in your very own BTTP T Shirt.

2 shirts, 2 colors. Black with UV Orange or Grey with UV Green logo, Girls and Boys fit. Pictures are just for reference.
*We have most sizes in stock and they will ship in a couple of days. If your size is not in stock we will get it to you within 2 weeks. If you want information please use our contact page.

The ultimate in bad grammar.

Not content with getting it all wrong back in the 1990’s (while the band where an overnight success across the UK). Now, several years after Back to the Planet’s reformation, after much thought, the band have decide to remake their infamous “WHOS FUCKIN PLANET!’ T-Shirt and do it all over again! This time the grammatically incorrect T-shirts come in Black or Charcoal Grey, with a bright fluorescent orange print of the offending sentence. Perfect for those who like to stand out in a crowd for all the wrong reasons. Also great for finding your mates on a dark and stormy night, or scaring away villains & troublesome wildlife at festivals. Doubles as a dishcloth or car polisher.

Whos: This should be either: ‘Who is’ or ‘Who does this belong to’ it should read either Who’s or Whose.

Fuckin: There is a g missing, so in place of this there should be an apostrophe to note the missing letter.

!: It’s a question, hello! It should be a question mark, not an exclamation mark.

Whose or Who’s? Some Impressive information.

Whose is the possessive form of who (or, occasionally, which). It means “belonging to whom or which.”

Who’s is a contraction of who is or who has. Notice the apostrophe replacing the missing letters.

Incorrect: Who’s department do you work for?

Correct: Whose department do you work for?

This website uses cookies to improve your experience while you navigate through the website. Out of these, the cookies that are categorized as necessary are stored on your browser as they are essential for the working of basic functionalities of the website. We also use third-party cookies that help us analyze and understand how you use this website. These cookies will be stored in your browser only with your consent. You also have the option to opt-out of these cookies. But opting out of some of these cookies may affect your browsing experience.
Necessary Always Enabled

Any cookies that may not be particularly necessary for the website to function and is used specifically to collect user personal data via analytics, ads, other embedded contents are termed as non-necessary cookies. It is mandatory to procure user consent prior to running these cookies on your website.